Olympic bars have a specified weight, length, and diameter. This is crucial to high level competition where the tiniest variation in weight can mean the difference between a gold or a silver.

The middle part of the bar, which is known as the grip section, is 4.3 foot in length. It has grip markers spaced 36 inches apart. These are textured sections of the bar that provide better grip. The diameter of the grip section is 1.1 inches.

The out parts of the par, where the weight plates go, are slightly bigger than the grip section. The outer edges have a diameter of 1.96 inches. These only fit Olympic weights. 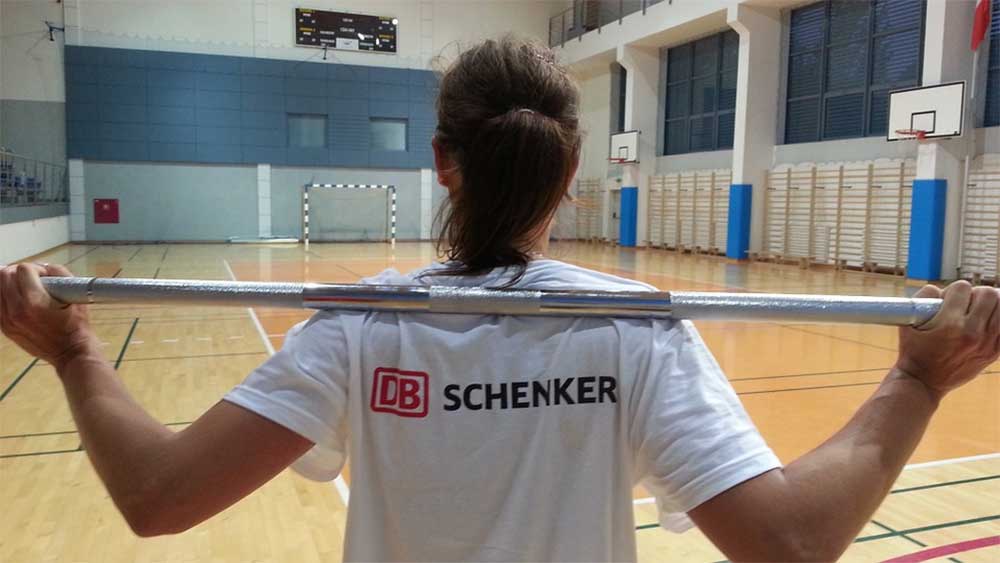 The women’s Olympic bar has the same design, but it is slightly smaller. It weighs 33lb or 15 kg and measures in at 6.6 foot.

The grip section of the women’s bar is 0.98 inches to allow for smaller hands. The outer sections have the same diameter as the men’s bar and use the same weights.

Olympic bars are used for all high-level competitive weightlifting competitions. This includes the Olympic and Commonwealth Games, as well as the Pan-American Games, and the World Championships.

How Heavy is a 5-Foot Olympic Bar?

There is no such thing as a 5ft Olympic bar. All Olympic bars are 7.2 foot long for men, or 6.6 foot for women.

They are, however, often confused with standard bars. The funny thing about standard bars is that extraordinarily little about them is standard. There is no set weight, length, or diameter like you get with an Olympic bar.

Standard barbells can be between 5 and 7 foot in length. The weight will depend on the quality of the construction and the materials used.

An average estimate of weight would be around 20lbs for a 5-foot barbell. They are considerably lighter than Olympic bars which is why they are often used by beginners.

The other thing to be aware of is the fact that standard bars don’t have a standard diameter. This means you’ll need to pay close attention to the product listing to make sure you can comfortably hold the bar.

They are generally about 1 inch in diameter, but cheaper bars can be considerably slimmer. You can purchase rubber grips that slide onto the bar to increase the grip if you need to.

Standard barbells have a lower load bearing than Olympic bars. They tend to hold up to around 250lbs. This is ok for beginners and intermediates but not ideal if you’re trying to max your lifts.

How Heavy is a 6-Foot Olympic Bar?

A women’s Olympic bar is 6.6 foot in length and weighs 33lbs. There is little room for variation on Olympic bars, so they should all be this size.

If you have a bar that is dead on 6-feet, then it is a standard bar rather than an Olympic bar. Standard bars are cheaper and vary in size and weight depending on the manufacturer and the intended use.

Some products are listed as 6ft Olympic bars. These tend to be standard bars with wider sleeve sections so that they can use Olympic weights. The truth of the matter is 6-foot bars can’t be used in the Olympics and so can’t be called Olympic bars.

A 6-foot standard bar will usually weigh about 28 – 30lbs. The variation depends on the materials used and the manufacturer.

While the average diameter for a standard bar is 1 inch thick this can vary from bar to bar. If the bar is thicker, you’ll notice that it is heavier and so closer to the 30lb rating. Some can be heavier still and hit the 40lb mark.

6-foot bars that weigh 40lbs are unusual because the balance of weight to length is slightly off. It just feels like an excessive amount of weight for such a short bar.

How Heavy is a 7-Foot Olympic Bar?

Olympic men’s bars are 7.2 feet long and weigh 44lbs. These are standardized in both height and length to preserve the integrity of the competition. At the highest level of competition, every milligram counts, so it has to be equal for all.

Bars that are dead on 7 feet long are actually standard bars. These are not fit for high-level competition. This is because they are standard in name only. The weight, length, and diameter of standard bars varies widely.

On average, standard 7-foot bars can weigh between 40 and 45lbs. You need to check the product listing and manufacturers’ information to clarify the weight of the bar before you start lifting.

You have to know the weight of your bar to accurately track your lifts and make sure you’re not overdoing yourself.

In the gym, if you see a barbell that looks to be around 7-foot, it is usually an Olympic bar. This means that you’ll need to use Olympic weight plates as standard weights won’t fit an Olympic bar.

People tend to buy 7-foot standard bars because they are a lot cheaper than Olympic bars. However, if you are planning on competing in weightlifting, you’ll need to invest in an Olympic bar soon enough.

Olympic bars tend to be heavier, stronger, and more dynamic. They need to be able to absorb shock because they are often dropped from above the head. This is what makes them different to powerlifting bars.