The deadlift is a hugely popular weight training exercise where a loaded bar or barbell is lifted off the ground to the hip region, and then placed back down on the ground - all in one smooth movement.

Contents show
1 Why Does Deadlifting Lead To Injury?
2 Back Injuries
3 Bicep Tears
4 Hip Pain
5 Knee Injuries
6 Damaged Hamstrings
7 Frequently Asked Questions
7.1 How Long Does A Deadlifting Injury Last?
7.2 What Are Some Of The Benefits Of Deadlifting?
7.3 What Should Hurt After Deadlifts?
7.4 Is Deadlifting Good For The Body Long Term?
7.5 Which Exercises Go Well With A Deadlift?
7.6 How Long Does A Bicep Tear Take To Heal?
7.7 What Body Type Is Best For Powerlifting?
7.8 Do Powerlifters Lift Weights Every Day? 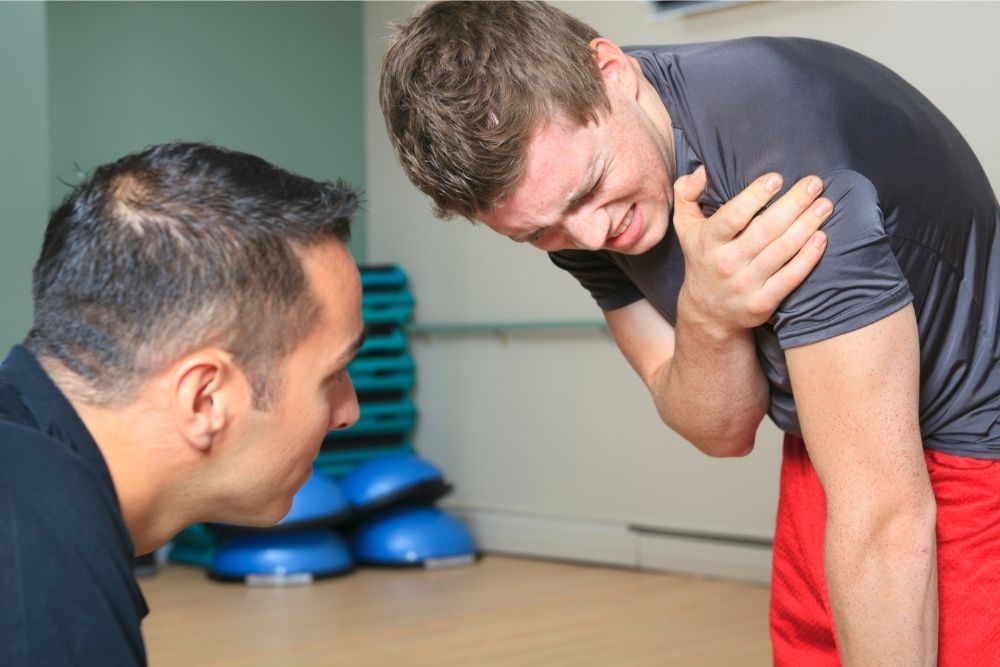 Despite the popularity and benefits associated with the powerlifting exercise, injury prevalence is higher for the deadlift, compared to other lifts such as the squat and the bench press.

But, just how much of a dangerous exercise is the deadlift? And what are some of the main injuries to look out for?

This guide will take an in-depth look at some of the most common injuries you can pick up from deadlifting, including all the information you need to know about back issues, hip pain, leg injuries, and much more.

We’ll also look to answer a number of the frequently asked questions in relation to deadlifting and injury.

Why Does Deadlifting Lead To Injury?

Before taking a closer look at some of the specific injuries that are picked up through deadlifting, it’s important to provide a brief explanation on what causes many of these injuries.

Research highlights that two of the main reasons deadlifting can often result in injury is because of the high load and overall intensity of the exercise. These factors have much more of an impact than bad form - although incorrect lifting technique can serve to accelerate the injury process.

Therefore, the fact that many people consider deadlifting a dangerous practice is because it puts significantly more stress on the joints and tendons of the body than other lifts.

This owes largely to the fact that the vast majority of powerlifters tend to deadlift more than they bench press or squat.

Despite some of the injuries that we’ll go on to explain a little later in this article, it’s worth keeping in mind that the overall occurrence of injury in powerlifting is still relatively low in comparison to sports in general.

For example, the injury rate of powerlifting is around average for non-contact strength sports and then significantly below the injury rates for contact sports such as soccer, hockey, and martial arts.

In terms of the nature of a deadlift, it’s a hip hinge exercise. Therefore, you’ll need to load a barbell, grip it, and then extend through your knees and hips until you’re in an upright position with your torso perpendicular to the floor.

In this type of movement, your hamstrings, quads, and glutes will do the vast majority of the work, while your hip flexors work through your hips and knees - just like they do in the top part of a squat - to extend both.

Meanwhile, your spine is stabilized and kept in a neutral position due to the hard work of your erectors, core, and various back muscles.

Other common injuries in powerlifting include bicep tears, hip pain, and meniscus tears (within the knee).

The deadlift can be a dangerous exercise for the spine, especially if done with incorrect form. This is because the natural starting position of the exercise places a significant amount of shearing force on the spine.

Shearing force refers to movements where the direction of force being applied isn’t quite aligned to the object it’s applied to.

For example, standing upright with a barbell positioned on your back puts compression force on your spine, whereas squatting down with the weight forces your torso to gradually become less upright, placing a greater amount of shearing force on your back.

Unfortunately, the spine isn’t built to deal with huge amounts of shearing force. This explains why your other muscles have to work so hard to stabilize it and keep it as stiff as possible during movements.

When performed at an elite level, the deadlift is gripped using one of the following three methods: with a mixed grip, with an overhand hook grip, or with straps.

In terms of injuries to the bicep, the mixed grip is the only one which poses the risk of suffering a bicep tear. This is because the stress placed on the bicep of the supinated arm using this grip is strong enough to tear the bicep clean off the tendon.

If you want to avoid this type of injury, it’s a good idea to avoid using the mixed grip altogether. However, it’s worth keeping in mind that biceps tears can be mitigated with plenty of strengthening and stretching of the muscle.

So, if for example, you’ve nailed the technique of a mixed grip and really don’t fancy switching to another grip, performing exercises such as bicep curls can help to reduce the risk of picking up a tear.

Furthermore, incline bench bicep curls are an incredibly useful exercise to use for stretching out your pecs - another muscle that’s prone to tearing during weightlifting and powerlifting.

The hip is constructed of a pelvis with two hip sockets. These sockets attach to the femoral head of each thigh bone.

When performing a deadlift, all the muscles located in the hips and femur work extremely hard to move the weight. These muscles include your quads, glutes, hamstrings, adductors, and other muscles within the hips such as the psoas.

During the process of shifting the weight in a deadlift, a considerable amount of stress is placed on the acetabulum. With this in mind, it’s hardly surprising that many of the common hip-related injuries that lifters pick up through deadlifting are caused as a result of acetabular stress.

These injuries aren’t affected too much by acute stress, but more by overuse - such as 5+ high intensity deadlifting sessions a week.

So, if you’re experiencing a fair amount of pain in your hips on a regular basis and it doesn’t feel like a muscular injury, it’s a good idea to get your hips checked out by an expert and lay off the heavy deadlifts until the pain subsides.

Another hip injury that can often occur through performing the deadlift is an anterior superior iliac spine (ASIS) avulsion. This is when muscles from the ASIS are torn - either partially or completely - off the pelvis during a lift. Most lifters typically experience this injury as a sudden pop or snap.

When performing a heavy deadlift, there’s a chance that the meniscus can become injured or torn. The meniscus is a vital ligament in the knee that’s essential for both stability and force transmission.

This usually happens if you’ve either overused the knee joint, or have been performing the deadlift with the incorrect technique. Furthermore, an old knee injury may also provide a point of weakness, underlining the importance of effective and constant rehabilitation.

Using the correct stance and starting from the right position is essential if you want to avoid picking up a problematic knee injury during the deadlift.

So, if you have an excessively wide stance or one that’s narrower than the recommended shoulder-width distance, there’s every chance that you’ll expose your knees to compressive forces which are far too high.

It’s also important to remember that you’re performing a deadlift, not a squat. Therefore, avoid starting in a position that’s too low as this can unnecessarily increase the compressive forces on the knee joint when progressing into the pull phase.

Another muscle that’s prone to tears, rips, and pulls when performing the deadlift is the hamstring. Located at the back of the upper leg, the hamstring is made up of several muscles which attach through the hips to the thighs.

Hamstrings are an essential muscle in any hip hinge exercise, including the deadlift. So, if you want to do everything in your power to keep them as strong as possible, it’s beneficial to do frequent stretching, isolation, and a thorough warm up/cool down before and after sessions.

The hamstring muscles most likely to tear during a deadlift are the semitendinosus and the biceps femoris.

How Long Does A Deadlifting Injury Last?

Needless to say, this all depends on what type of injury you’ve picked up.

For some of the more serious injuries such as a slipped disc or a hamstring tear, you’ll have to wait for at least six to eight week to be able to return to any kind of intense activity. Just keep in mind that without effective and constant rehabilitation, this recovery time could be considerably longer.

If your injury is just soreness or a minor strain, an initial 48-72 hour period of rest should be enough to allow the pain or discomfort to notably reduce. If the pain is still inhibiting your movement after a week or rest, it’s probably best to get it checked out.

What Are Some Of The Benefits Of Deadlifting?

There are a number of important benefits associated with doing deadlifts. While injury is always a possibility, many people believe that the benefits of the exercise far outweigh any downsides.

Listed below are some of the main benefits to keep in mind:

What Should Hurt After Deadlifts?

As is the case with all hip hinge exercises, it’s only natural to have a little bit of soreness or stiffness in your lower back after performing a deadlift workout. This is a normal response to the exercise and nothing to worry about, as your body is simply responding and adapting to the new exercise in order to become stronger.

Is Deadlifting Good For The Body Long Term?

Research shows that there are a number of long term benefits associated with deadlifting. For example, the popular strength exercise promotes an increase of bone density in younger generations. Deadlifting also helps to maintain this well into adulthood when bone density naturally decreases.

Which Exercises Go Well With A Deadlift?

If you’re looking to add some new exercises into your deadlift training to make things a little more interesting, there are plenty of options. Some of the most popular exercises include Romanian deadlifts, hip thrusts, single-leg deadlifts, and nordic curls.

It’s important to understand the fitness demands of each of these exercises, as the last thing you want to do is unnecessarily overload your body and risk picking up an overuse injury. Therefore, do plenty of research beforehand to make sure the exercises enhance your deadlift training, not inhibit it.

How Long Does A Bicep Tear Take To Heal?

A bicep tear is one of the worst injuries you can suffer from deadlifting. It usually takes around three to four months for your biceps muscle to fully heal, although it’s possible for you to do some daily activities within two to three weeks so long as you’re not using your injured arm.

What Body Type Is Best For Powerlifting?

Generally, endomorphs are the best-suited body type for strength and power exercises such as powerlifting, sumo wrestling, and strongman.

This is because they exhibit a large body size, short limbs, and a natural ability to easily pack on muscle. These qualities give them a notable advantage over other body types such as ectomorphs and mesomorphs.

Do Powerlifters Lift Weights Every Day?

No, most experienced and knowledgeable powerlifters will avoid lifting weights every day. They generally look to train between three to fives times a week, with some athletes just about stretching to six sessions a week.

Powerlifters avoid training every day because for optimal strength gains, they only need to lift weights and train certain muscle groups two to three times a week. Anything more is often too much.