Watching an Olympic weightlifting competition, it might surprise you to see the build of the competitors. Many of them are large, without the defined muscle we imagine when we think of strength. To the casual observer, it might seem they all have something of a gut.

There are many reasons why people choose to lift. For some it may be to gain strength, and for others it may be to achieve a certain physical look. If you want to try Olympic weightlifting, it’s probably because you’re interested in strength training.

Improving how much you can lift, as well as the technique used to do so. In which case, you want a body that best works for this purpose. That’s not going to be washboard abs. 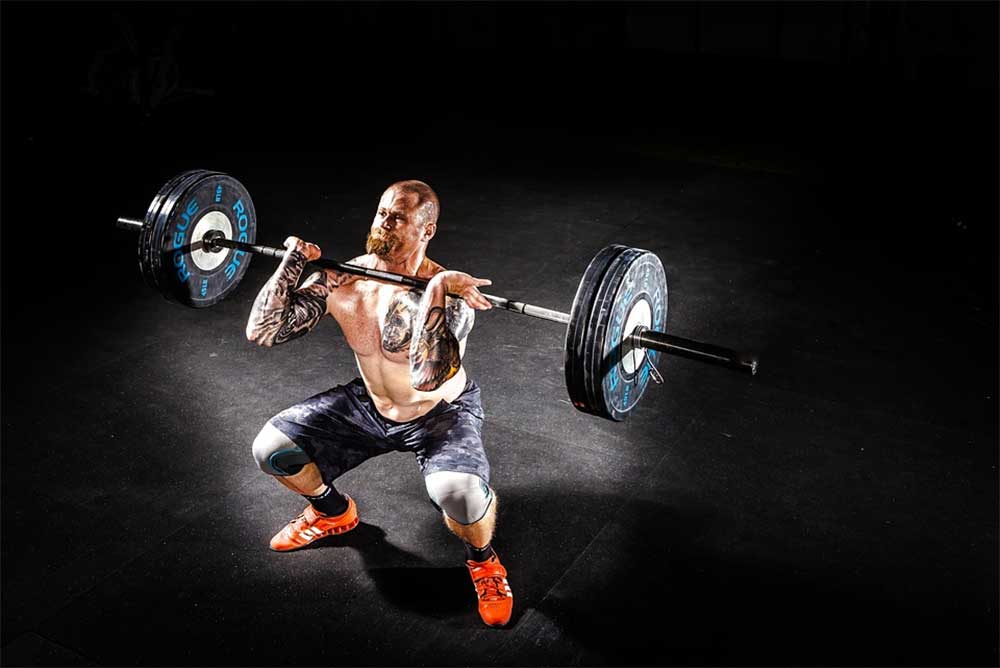 Although an Olympic weightlifter initially may just seem fat, there’s more to the story than a first assumption. Beneath the obvious layer of fat, Olympic weightlifters are covered in muscle. It would be inaccurate to assume that the belly of a weightlifter is a gut. A lot of it is big, bulky, muscle. The core is essential to lifting, so a good weightlifter will gain muscle like a belly.

So there is muscle, it’s just hidden under fat. This layer of fat plays several important roles. It actually protects the muscle from damage, making it safer to lift those insane weights. But Olympic weightlifting doesn’t just require muscle. It also needs speed and technique.

A good base is imperative for a clean, well-handled, lift. Every part of the body is going towards holding that weight up. So every part of the body needs to be able to handle it. Extra weight goes towards building this support, as well as contributing to the raw strength. We see weightlifters often wearing belts because it keeps the abs and muscles in alignment. This forms a sturdy column for difficult lifts.

It wouldn’t be quite accurate to assume that Olympic weightlifters aim to put on weight. However, they do need a lot of energy to keep their strength, and the bar, up. It’s not easy to try and snatch a weight up and out of the air.

Throughout a training session, an Olympic weightlifter will need to eat regularly to gain calories. The easiest way to do this is with high calorie food consumed consistently. They also do little in the way of cardio. That means the weight isn’t exactly being shifted.

Also, not all Olympic weightlifters look the same. Weightlifting is broken down into different weight categories, so before a competition they may be required to lose or gain weight. The heaviest weight categories will be much larger than those in the smaller categories. You still may not see those defined abs, because that layer of fat is serving the same purpose.

So, Olympic weightlifters are fat because they need to eat regularly, and they won’t exactly be eating healthy. This weight then provides the muscle with a protective layer. It also gives them a stable base to exert force from.

It’s something of a misnomer to call strongmen overweight. There is an obvious difference in stature and build between a strongman and a more ‘typical’ athlete. We’re used to associating fitness with lean muscles. So it seems strange to see the very strongest men in the world looking so different. You might even say they seem unhealthy, or unfit.

Classing someone as overweight doesn’t necessarily give the correct overview of their health levels. Being heavy doesn’t mean you don’t have muscle, strength, or stamina.  Strongmen are overweight if we view them via BMI and other similar tests. However, strongmen aren’t ‘over’ weight when you consider their weight as a proportion of fat to muscle, and as it’s needed in their career.

Much like with other forms of weightlifting, strongmen need a lot of calories to power their lifting. Even a single lift can expend a huge amount of energy. To support this, they need to eat regularly. Compensating for the energy lost requires high-calorie food.

The easiest way to get those calories is through rich, generally less healthy, food. Think about it - it would be almost impossible to pull an airplane on an all salad diet. This regular consumption, combined with the types of exercise strongmen do, means that weight builds up and sticks.

Strongmen and other types of lifters won’t do the same kind of repetitions as, for example, bodybuilders. Instead, they work towards lifting incredibly high weights for a limited number of reps. This causes muscles to develop differently. They also don’t need to do things like cardio, and other fat burning activities. The training instead will focus almost entirely on building muscle.

Because there is a lot of muscle involved, we just can’t see it, a strongman may be in a category classed as ‘overweight’. This wouldn’t be taking into account where that weight comes from. Muscle is heavier than fat, because of the density. So for a strongman, with so much heavy and dense muscle, an ‘overweight’ classification is inevitable.

Another factor to consider is the competition element. The typical image we have of a bodybuilder is someone intending to display their muscles. In strongman competitions, appearance is of no importance at all.

One way bodybuilders emphasize muscles is through a restricted diet and low water levels. This will stop fat from building up and covering the muscles. For a strongman, this isn’t necessary. It would actually be incredibly harmful to cut down on food and water before competing - and it isn’t a good idea in most cases anyway.

In other sports, weight needs to be balanced for speed. This is why runners are generally lean. Speed isn’t necessary for a strongman, certainly not compared to the bulk required for stable lifting.

Strongmen are a high weight, but the weight is necessary for performance. Calories need to be consumed regularly for strength, the focus is building muscle, and the muscles don’t require visible prominence for competition.