If you’ve ever watched a powerlifting contest, you may have noticed something that gives many fitness enthusiasts pause for thought: why do powerlifters have big stomachs? 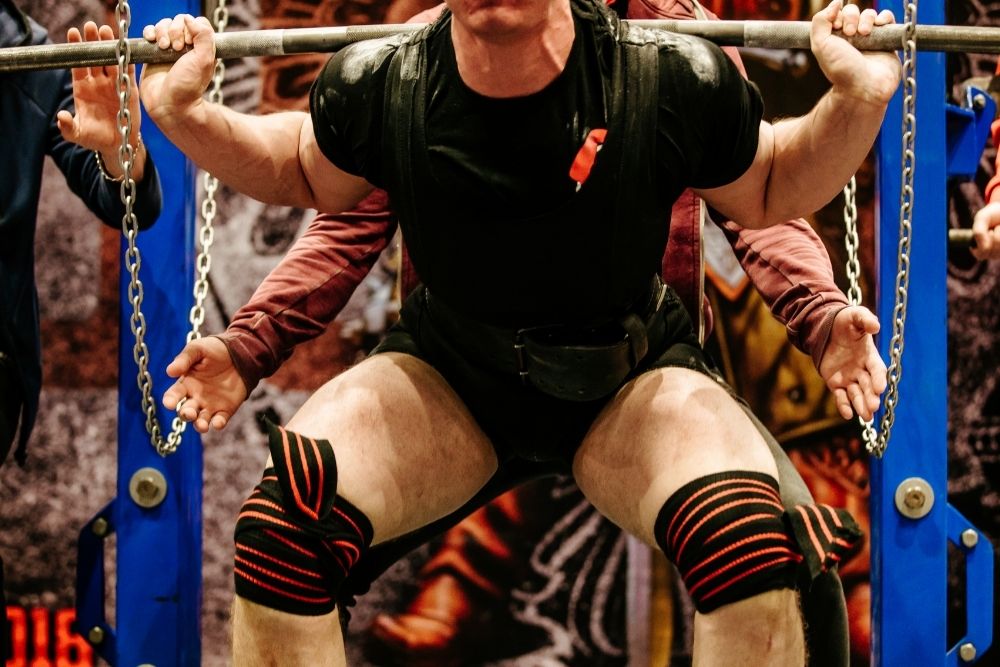 It’s true that many powerlifters have stomachs that protrude more than you might expect from professional athletes. If you’re not familiar with the ins and outs of powerlifting as a sport, the physique of the average competitor might catch you off guard.

With that being said, there are some very good reasons why lots of powerlifters have big stomachs, and we’re going to cover those reasons in today’s article, so stay tuned!

If you’ve clicked on this article, you may be new to the world of powerlifting, in which case, a brief introduction to the sport is in order.

Powerlifting is a strength-based sport in which competitors perform 3 different types of heavy lift: the deadlift, the bench press, and the squat.

The aim of powerlifting is, quite simply, to lift as much weight in each category as possible. The winner of a powerlifting competition will be the contestant who lifts the most weight overall.

Essentially, the information to take away from this summary is that powerlifting is about technique and raw physical strength, neither of which require a chiseled, lean physique.

Do All Powerlifters Have Big Stomachs?

As we mentioned earlier, the focus in powerlifting is on how much you can lift. Having a large stomach doesn’t prevent someone from being physically strong, and since there are no aesthetic requirements in terms of physique, it’s not uncommon to see some bellies in powerlifting.

With that being said, many successful powerlifters have more ‘traditionally’ athletic builds. Again, it’s all about the lifting ability, and that’s something that can be cultivated regardless of the size of your waistline.

Why Do Some Powerlifters Have Big Stomachs?

So, we’ve confirmed that some (but not all) powerlifters have big stomachs and that this is not an issue due to the nature of the sport. But why are big stomachs such a common sight in competitive powerlifting?

Well, there are several factors that might contribute to the bulky powerlifting physique.

For one thing, in order to build enough muscle to compete in professional powerlifting, athletes need to eat a lot. And when we say a lot, we mean a lot.

The National Strength and Conditioning Association estimates that male powerlifters will need to consume about 23 calories for every pound of their body weight on a daily basis. For female powerlifters, that number lowers slightly to 20 calories.

Let’s use the example of a male powerlifter weighing 250 lbs. That might sound like a lot, but for a world-class powerlifter, it’s fairly standard.

So, this 250-pound powerlifter would need to consume 23 x 250 calories every day according to the NSCA. That works out as 5,750 calories per day - more than twice the daily recommended calorie intake for the average man.

A significant percentage of a powerlifter’s daily calorie intake will consist of lean protein since this is the most effective food source when it comes to building muscle.

But let’s be realistic - nobody, even the most dedicated of athletes, is going to consume 5,750 calories worth of grilled chicken and salad every day. Apart from being incredibly dull, eating this way wouldn’t constitute a balanced diet. Ultimately, some weight gain is pretty much inevitable.

Of course, much of the weight gain you might expect to see from this kind of calorie consumption is counteracted by the intensive training that powerlifters go through.

With that being said, regardless of how often or how heavy you lift, if you’re eating nearly 6,000 calories each day, you can expect to see some weight gain around the waistline.

It’s also important to note that not all of the bulk you might see around powerlifters’ stomachs is due to excess fat. In fact, many powerlifters with large stomachs also have very defined abdominal muscles.

Remember, as much as powerlifters might pack on the pounds from caloric intake, they’re also packing on muscle in the gym.

These two factors combined can give the appearance of excessive belly fat, when in fact, that’s often only half the story. Yes, powerlifters are more likely than most other athletes to carry fat around their waistlines, but a lot of the bulk that you see is actually muscle.

Another factor that may contribute to the image of the big-bellied powerlifter is the use of powerlifting belts.

These belts are common in all powerlifting classes, but they’re even more of a standard accessory in the higher weight classes, in which many of the competitors weigh close to 400 lbs.

The heavier the athlete, the heavier the expected lift, so larger powerlifters will often wear belts around their waists for postural support. Powerlifting belts are heavy-duty, so they’re often thick and bulky, contributing to the appearance of an even larger stomach.

It’s impossible to make a blanket statement as to whether or not powerlifters, as a rule, benefit from good physical health. This is because there’s no one way for a healthy body to look and no single path to achieving good health.

While many powerlifters take great care of their bodies and are in very good physical shape, there are health risks associated with the sport, including an increased risk of injury. However, weight gain doesn’t seem to be up there with the biggest powerlifting-related health risks.

Scientific research has suggested that the main threat to powerlifters’ health is cardiological stress caused by lifting heavy weights.

Of course, there is a correlation between excess body fat and the risk of heart and circulatory conditions. However, since not all powerlifters carry excess fat, it’s difficult to say how much weight gain contributes to health issues in the sport.

Are Powerlifters The Same As Strongmen?

If you look at a picture of a typical ‘strongman’, you’ll notice that these athletes also have more of a tendency to be larger in the stomach area.

This might lead you to wonder whether powerlifters and strongmen are one and the same. After all, both involve heavy lifting and the expected physique seems to be very similar.

However, powerlifting and strongman are different disciplines with their own sets of rules - despite the fact that the terms are often used interchangeably, even by people in the industry.

While both powerlifting and strongman competitions basically involve lifting as much weight as possible to prove your strength, powerlifting exclusively focuses on 3 specific lifts. As we mentioned previously, these are the deadlift, squat, and bench press.

Strongmen, on the other hand, are expected to perform in a wider range of weight-lifting trials, including single-arm dumbbell presses and tire flipping.

With that being said, although training for strongman events will be more varied than powerlifting training, preparation for competitions looks pretty similar.

Both powerlifters and strongmen will bulk up through increased calorie consumption in order to support muscle growth. This is why strongmen and powerlifters alike might have big stomachs.

In short, some powerlifters have big stomachs due to a combination of the requisite caloric intake and increased muscle mass in the abdominal area.

However, not all powerlifters have big stomachs, and those that do are not necessarily carrying much excess fat.

Ultimately, powerlifters need to eat much more than the average person to build enough muscle for competitive lifting. Sometimes, this can lead to an increase in waist size.